TOP > NEWS > Interview with the head of sushi chefs. What meanings do “Hocho” (Japanese kitchen knife) have in making sushi?

Interview with the head of sushi chefs. What meanings do “Hocho” (Japanese kitchen knife) have in making sushi?

Do you have any idea how many types of Hocho (Japanese kitchen knife) there are? An experienced sushi chef uses many different types of Hocho depending on the ingredients they prepare, the way of cooking and so on. So, to make perfect sushi, the process of cooking starts much before picking up the best ingredients- It actually starts from the choice of knives.

Some people might find it obsessing being picky about knives given making sushi seems easy-cooking, (which actually is not.) However, that is what sushi is. You have infinite things to care about in making sushi, and that is where Itamae, namely professional sushi chef, show their craftsmanship and prove who they are!

Today, we interviewed Mr, Sato, who is the head chef of Itamae sushi. We asked him about the Hochos he uses to make amazing sushi and how to use them separately.

– This is his bag. Guess what’s in there. 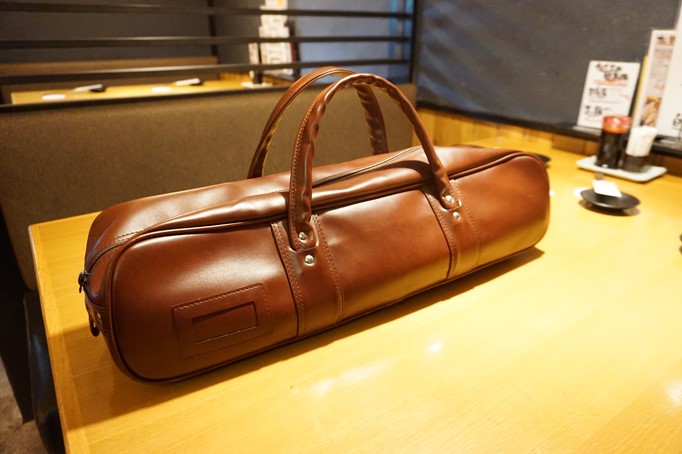 – The answer: Knives. This is where his astonishing sushi making starts. 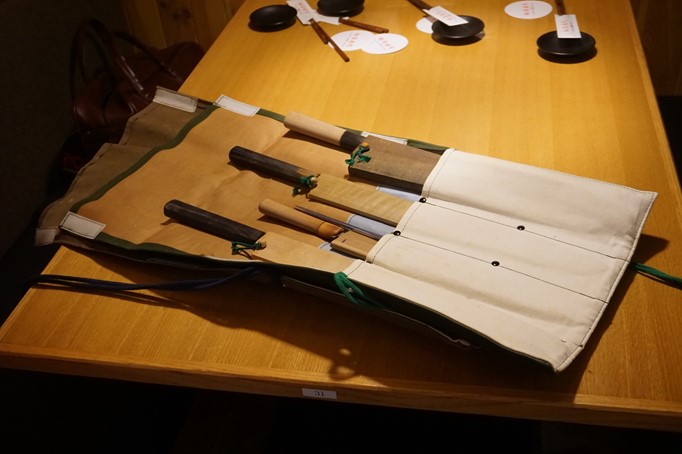 -I didn’t know there were this many types of Hocho. Can you teach us when and how to use each Hocho?

Mr. Sato: It’s “Deba-Hocho” which is used for general preparation of fish, like cutting fish and making it ready to be used for sushi. This type of Hocho has a very thick blade which gives the knife high endurance and “weight” to cut the bones of fish. “Yanagiba-Hocho” is mainly used to cut sashimi. This type of Hocho has “Thinness” and “Sharpness”. At the same time, the blade is long and heavy. Yanagiba-Hocho has a significant role in making sushi. The process of preparing fish with “Yanagiba-Hocho” is important to get the best taste out of fish.

This is how different they are in thickness. 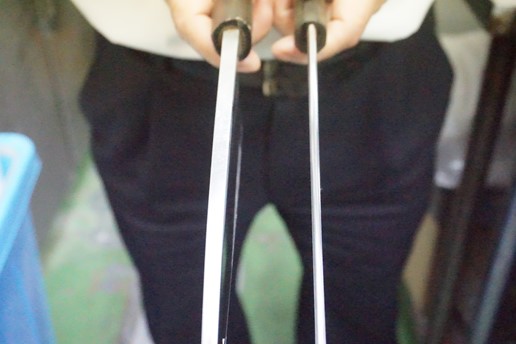 -So already two types of Hocho are used just to turn fish into Sashimi.

Mr. Sato: Well, there is also difference of the size and preference for each chef. So, it’s actually more than two.

-What are the other types of Hocho?

Mr. Sato: Back in the day, master or senior chefs used to be pickier about Hochos. For example, you would have been kicked out if you had used “Gyu-to” (western knife) for sushi, which I suppose some people do nowadays.

-So the world of Hocho is really something deep and complicated isn’t it?

Mr. Sato: It is. For example, the type of Hocho you choose has a meaning in the status of a sushi chef. If you choose one with a handle made of ebony, which is expensive, people would get the idea that you are experienced.

Also, some Hocho have their own sheath to protect its blade…like Samurai or Ninja sword. 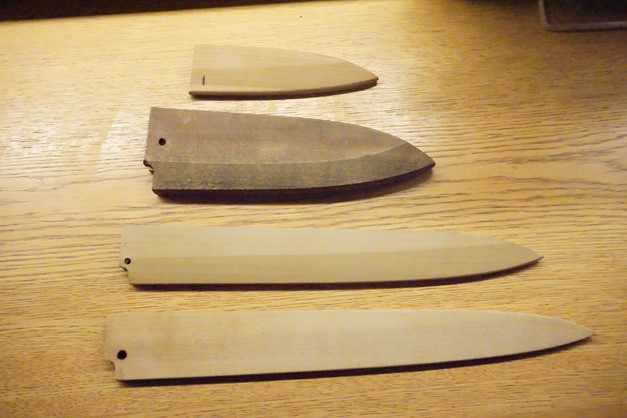 And if you have a close look at the surface of a Hocho, you will notice that there is a signature of the Hocho company which crafted it. 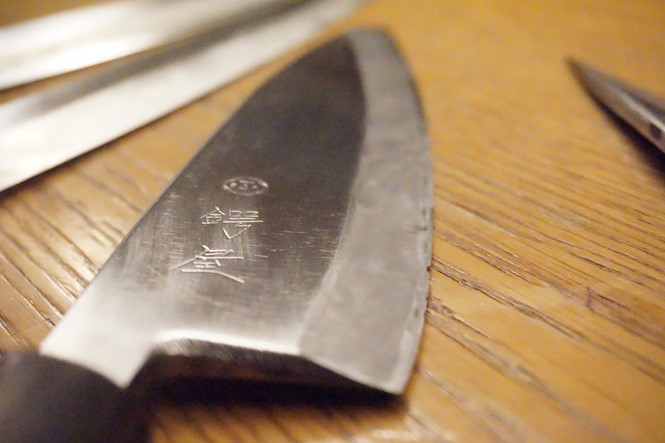 Look at the little one in the picture below. 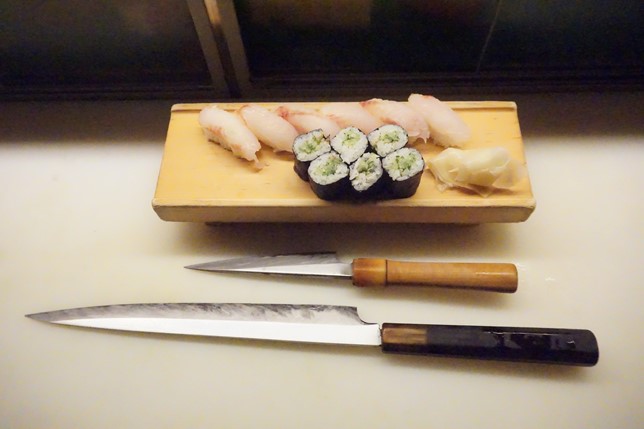 It’s getting smaller since the blade needs to be sharpened, so I don’t use it for cutting sashimi anymore, but I’ve been using this for 30 years and I still use it for more delicate work like decoration. 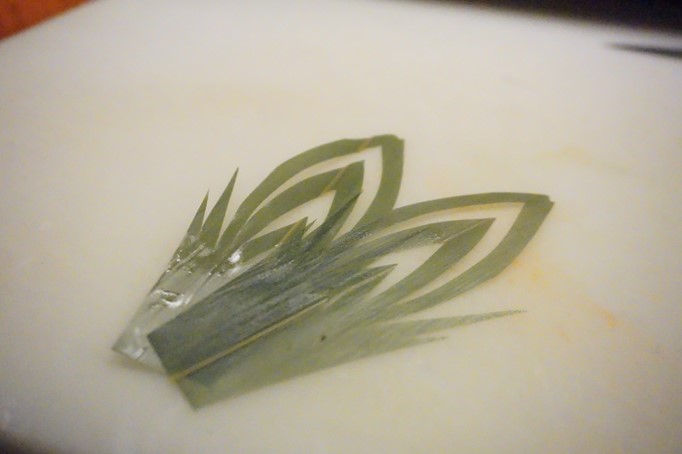 -Wow, I feel like I can see the spirit of a sushi master in the fact of using the same knife for 30 years!

Mr. Sato: But without experience and skill, you can’t handle Hochos or you could even damage it.

-Do you have any recommendation of Hocho for beginners?

Mr. Sato: It depends on the use of Hocho, but I’d recommend one with a long blade for beginners.

Mr. Sato: When you cut something with a Hocho, you are supposed to put the blade on the surface of the ingredient and cut it by pulling the blade back. So, you don’t need to put power when you cut sashimi, it’s only pulling. However, short Hochos have light body, which means you would feel like you need to put power on the knife because it feels light, and you’d actually do it. So, learning to cut fish without putting power is the first step to be a sushi chef. Otherwise your hands would get exhausted while cutting fish all day. So, this is why I recommend heavy long Hochos for beginners.

-So, beginners have to learn the power control before actually make sushi.

Mr. Sato: Yes. Back in the days, beginner sushi chefs weren’t allowed to cut fish even for practice. So, they used to be lined up in a row by the master chef after the restaurant closes and practice with bamboo leaves instead of fish haha.

There is and has been always Japanese spirit in Hocho.

-Now I can see how to make sushi and also how chefs see sushi has been changing with the times. Did people use to be pickier about how to use Hochos?

Mr. Sato: Frankly speaking, they are always picky. Well, I guess you might have been jeered if you have had a better knife than your senior chefs.

-So, there is a kind of silent code like you have to be good enough to have a good knife, right? Is there anything else that only sushi chefs can see?

Mr. Sato: Well Hochos could be very dangerous, it’s really sharp. So, we are supposed to say clearly ‘Passing through’ when we pass through behind someone.

Sushi is complicated. So just go where good chefs are.

-Thank you for everything today! We would like to ask you one last question: In which point do you think you see the difference of the skill of chefs?

Mr. Sato: You can’t really see it by literally looking at it. The thing is, in our world, something seems difficult could be easy, but the opposite could be also true. 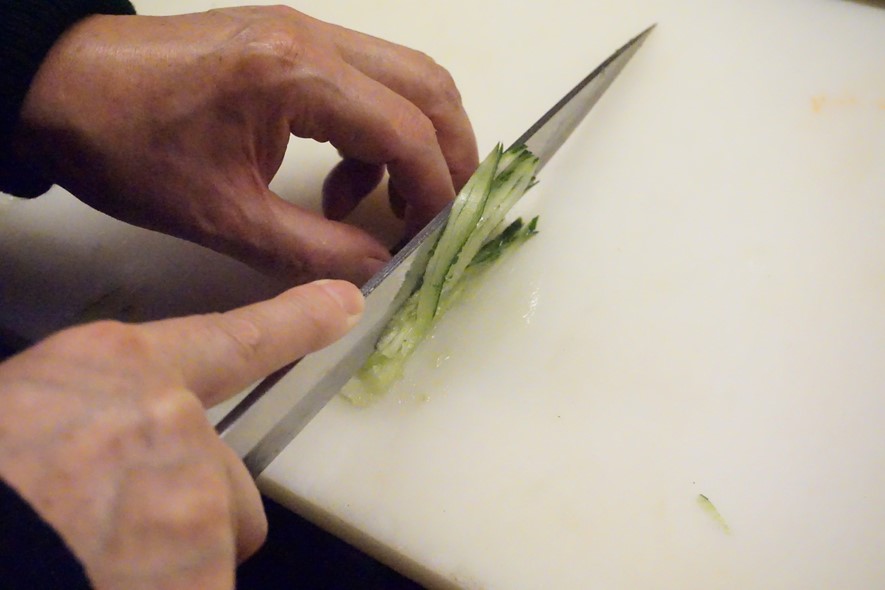 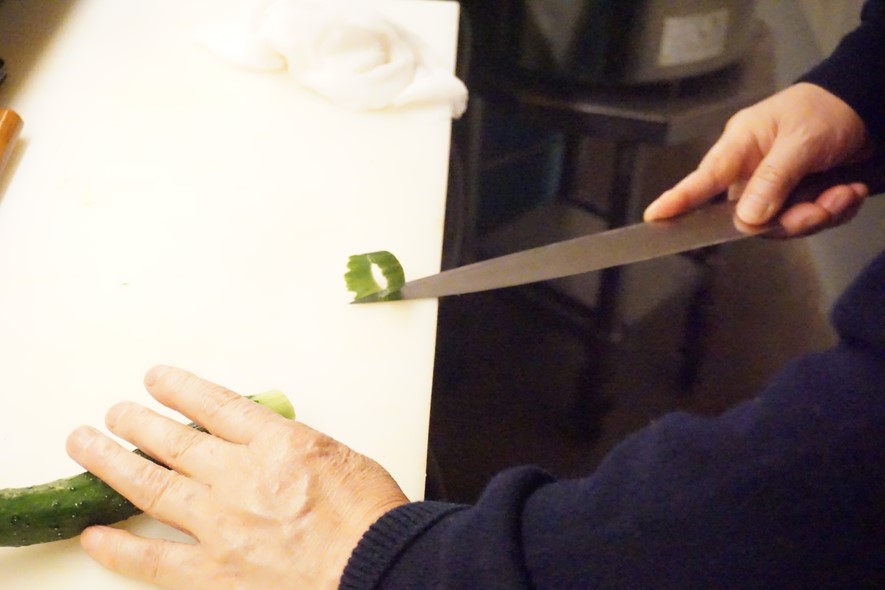 When you cut a cucumber, water come out of it, which makes it difficult to fix the cucumber by hands. So cutting a cucumber in strips is more difficult. In the world of sushi, chef’s sprit and skills are hidden in somewhere unexpecting, which is why it’s interesting and why I love it.

-Thank you very much again Mr. Sato. It’s amazing how he respects sushi after 30 years of experience at counter. Do you still think making sushi is an easy job? It’s not just putting a piece of fish on rice. We, Itamae sushi, are always waiting for you who want to enjoy the taste of real sushi and the master craftsmanship. If you are looking for an authentic but also enjoyable sushi restaurant in Tokyo, try us!